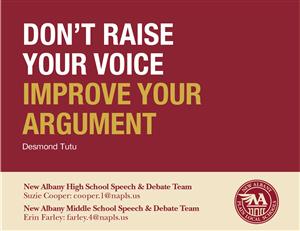 Do you like current events? Do you enjoy writing? Do you like arguing? If you answered yes to any of these questions, the New Albany Speech and Debate Team is the place for you.  You will learn how to argue both sides of a topic, master the use of logic and evidence to win a debate, and have lots of fun doing it.  You also have the option to not participate in Debate, but choose Competitive Speech instead.  You can create your own speech or memorize a historical speech.  The season runs from October to March and includes three to four tournaments for both speech and debate on Saturdays throughout the state.