Coming this Fall - Once On This Island Jr.

We are thrilled to announce that New Albany Middle School will be producing a Fall Musical! We will bring ONCE ON THIS ISLAND JR. to life in October of 2018. This production will be in addition to our Spring 2019 musical which will be announced soon. All 6th, 7th and 8th graders may audition for and perform in both shows.

SAVE THE DATE! Auditions for ONCE ON THIS ISLAND JR. will take place August 13-17, 2018. Performances will happen during the week of October 16-21st.

With its poignant story and catchy Caribbean-flavored score, Once on This Island JR. is a highly original theatrical adaptation of Hans Christian Andersen’s popular fairy tale, The Little Mermaid, and the Tony-nominated Broadway musical by the legendary writing team, Ahrens and Flaherty.

Through almost non-stop song and dance, this full-hearted musical tells the story of Ti Moune, a peasant girl who rescues and falls in love with Daniel, a wealthy boy from the other side of her island. When Daniel is returned to his people, the fantastical gods who rule the island guide Ti Moune on a quest that will test the strength of her love against the powerful forces of prejudice, hatred and even death. 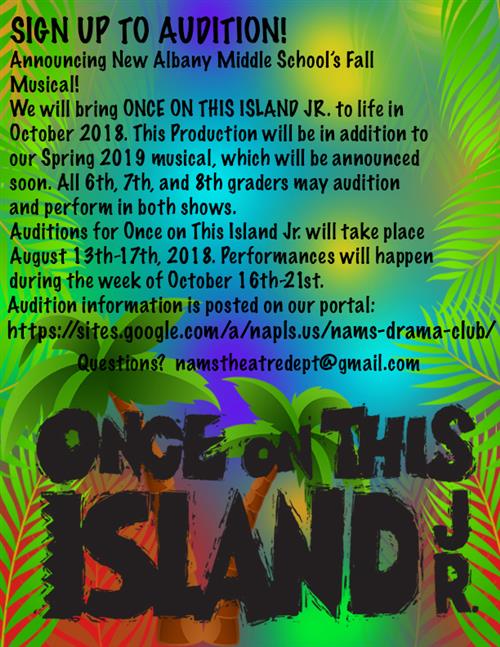