Out of the 55 teams that competed at the Buckeye FIRST Robotics Regional competition, Manasa was one of two students chosen to be a semi-finalists for the prestigious FIRST Dean's List award! In order to be chosen a mentor or coach must submit a 4000 character essay covering the following qualities and accomplishments of the student.

Manasa will attend the FIRST World Championship in Detroit where she will compete and ten FIRST Robotics Challenge students from around the globe will receive the coveted FIRST Dean's List award. Award recipients will each receive the following:

The NAHS Digital Eagles team is extremely excited for Manasa and wish her the best of luck at the World Championship!

Read the Essay submission on her behalf below from Coach Doug Jones. 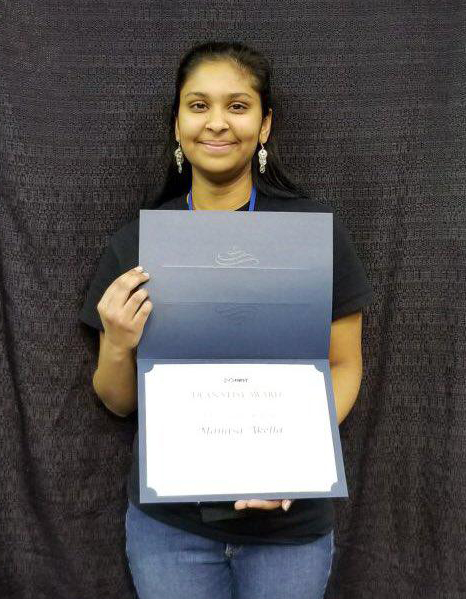 Manasa Akella​ has demonstrated exceptional leadership since starting with FRC team #5667, The Digital Eagles (Formerly Team AIR), two years ago as a freshman. I immediately noticed her drive and contagious enthusiasm to contribute to the team.

Her ability to lead became evident half-way through our build season her first year on the team. She was assisting on our fabrication team when the lead of that team unexpectedly left. Instead of getting discouraged Manasa took charge and completed not only our drive obstacles but also the pit setup, despite her lack of prior experience in woodworking. Manasa enjoys working with her hands and excelled at learning to use the hand tools and power tools to complete the work. The rest of the team took notice and nominated her to lead her sophomore year.

Last year Manasa was a primary contributor to the build of our robot last year and has become very efficient at working with both metal and wood. She continues in that role this year, however, she is also mentoring our fabrication team to teach new freshmen teammates the ropes.

Because Manasa is an effective communicator, last year the team asked her to be our spokesperson at competitions. She was responsible for collaborating with our alliance teams, conversing with judges and representing the team during the semi-final match team picks. Another strength is that she is able to manage stressful situations. When the team has faced challenges, on and off the field, she has demonstrated her ability to remain calm and help the team work through a solution.

Manasa has a passion to share FIRST with other students, especially young women. She approached our Middle School Principal, Donna LeBeau, about starting a FIRST Lego League team. Mrs. LeBeau loved the idea and with the help of her father, Ram, the team was born. Manasa put in countless hours mentoring and coaching those students and it paid off. The team made it to the State Championships and Manasa earned the Mentor Award twice during the season.

Manasa also has demonstrated her entrepreneurial spirit and commitment to the team’s fundraising efforts. In 2016, recognizing that the team needed to raise additional funds and to increase its visibility at our high school, she took the initiative to organize the team’s first ice cream fundraiser. She was responsible for all aspects of the fundraiser including completing the school’s required paperwork, ordering the ice cream, advertising the sale at our high school, and recruiting teammates to sell the ice cream. The fundraiser generated over $540 in profit. In 2017, Manasa organized the second annual ice cream fundraiser and increased the team’s profit to $1100.

In addition, she envisioned and organized the team’s first Halloween Haunted House fundraiser in 2016. Despite having only two weeks to plan and to create the Haunted House in the team’s build space, she and her teammates raised over $2000. This year the team’s Haunted House raised over $4000 and incorporated robotic elements into its special effects (e.g., sensor and motor to open and close locker doors when someone walked by the lockers).

The Haunted House also provided valuable public awareness about our robotics team when a local newspaper and television station included a story about our team and its Haunted House. The fundraisers created by Manasa have become annual events and will be part of her legacy on the robotics team. Manasa possesses all of the qualities of a strong leader: passion, dedication, imagination, and a strong work ethic.