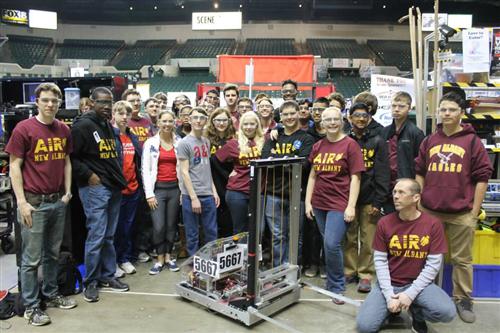 Planning a winter getaway, looking to surprise that special sports fan? Check out some of the amazing items up for grabs in the Online Auction to benefit the NAHS Robotics Team!

As you may recall in their Inaugural Year the New Albany FIRST Robotics Team, also know as Team AIR (All-in-Robotics) were invited to compete compete in the World Championships against hundreds of the top teams from all over the globe in April 2015 in St. Louis, Missouri.

Read More about the Team

This success also takes sacrifice and and in an effort to support the team in their second season, an Online Auction is now underway.
The NAPLS Robotics Team Holiday Fundraiser will run December 9-16, 2015. The Holiday Fundraiser will help New Albany Robotics: Team Air to fund their second year of participation in the FIRST Robotics Competition (FRC); combining the excitement of sport with the rigors of science and technology.

Proceeds from the auction event will go to New Albany Robotics: Team Air. So, tell your friends, family, community. Get everyone in on the auction action!
www.biddingforgood.com/teamair