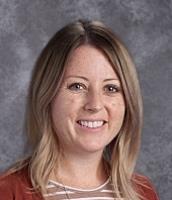 When I began student teaching in New Albany-Plain Local Schools with Mr. Morgan in 2010, I used to refer to going to work as getting to go to Disney World every day because everyone was so positive and it was all about the kids! Seven years later, I am so excited to be part of the New Albany team.

Overall, I have had a diverse career path since graduating from Otterbein College in 2004 with a Bachelor’s Degree in Public Relations. I began my career in higher education as an admission counselor at Otterbein. While at Otterbein, I earned my Master’s Degree in Higher Education Administration from Ohio University in 2008. What I quickly found while working at Otterbein was that although I loved helping students get into college, I wanted to work with students when they were younger so that I could have a greater impact on their college and career readiness.

While at Otterbein, I earned my Master of Arts Degree in Teaching in ELA and Social Studies in 2010 followed by my Generalist for Math and Science in 2012. I have had the opportunity to teach middle school ELA and Social Studies in both Canal Winchester and Gahanna-Jefferson Schools. Most recently, I earned my Administrative Specialist License from Ashland University in Curriculum and Professional Development, and I have spent the last two years as a Teacher Leader for Gahanna. My role allowed me to coordinate curriculum and professional development for grades 5-9 ELA and Social Studies. This position has been an amazing experience and I am now excited to be back to working with kids in the classroom!

As a wife to an elementary principal and a mom of two beautiful young daughters, my passion is helping kids learn, grow, and explore. Evangeline (Evie) is five and is entering kindergarten in this fall, and Ella is an incredibly curious two year old. We keep extremely busy as a family with non-stop adventures and family outings. I am beyond excited to be able to add New Albany to my “family”!